A Center of Excellence 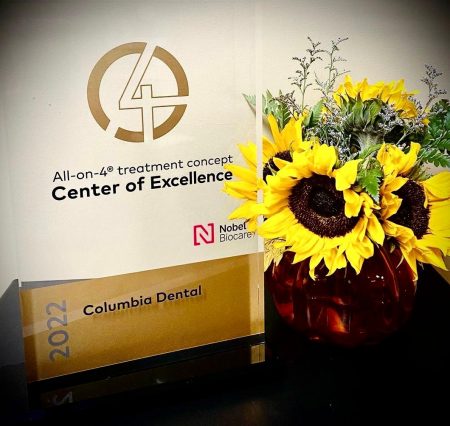 Nobel BioCare, the leading company regarding Dental Implants has named Columbia Dental one of their Centers of Excellence (https://www.nobelbiocare.com/en-us/find-all-on-4-center).  For the cutting edge in implant technology, it is best to be associated with the leader and we’re proud to have been named a Center of Excellence for Nobel BioCare.

There is incredible science behind implants, what they’re made of, what sort of surface they have, what coating they may have and where in the jaw and gum they will be placed, as well as what angle.  It is not just the jaw bone, but the surrounding soft tissue to ensure they are secure and integrate fully into the bone and soft tissue.  The height and width are extremely important and the abutment type and shape for which the crown of the tooth sits upon to function as a fully integrated tooth or support system for the prosthetic that would attach to it.

Implants are not dentures.  Dental implants are replacement tooth roots. Implants provide a strong foundation for fixed (permanent) or removable replacement teeth that are made to match your natural teeth and last the rest of your life.

We like to say implants are the earmark of modern dentistry, the newest and latest evolution to help make your mouth fully functional after the loss of teeth due to disease or damage.  The reality is that implants date as far back as 4,000 years ago when bamboo pegs were carved in China and used to replace missing teeth. These were fixed onto the bone in the mouth. Around 2,000 years later, the Egyptians adopted a similar practice of carving precious metals and pegging them onto the jawbone. The first recorded case of a metal implant was found in an Egyptian king from 1,000 B.C. Archeologists have also found numerous skulls with artificial and transplanted teeth made from elephant ivory or rare gems like jade.

In the middle of the 1600’s periodontally compromised teeth were stabilized in Europe with various substances. From the 1500’s to about the 1800’s, teeth in Europe were collected from the underprivileged or from cadavers for the use of allotransplantation. There were a series of different types of material and ways to insert implants into the gums and bone of many different types of designs from blades to spirals to screw shapes.  Gold, silver, cobalt, chromium, stainless steel and aluminum were tried as the metals for implants.

The biggest breakthrough came in 1978 when Dr. P. Brånemark presented a two-stage threaded titanium root-form implant; he developed and tested a system using pure titanium screws which he termed fixtures.    He first placed the titanium implant in patients in 1965 and were the first to be well-documented and the most well-maintained dental implants thus far.  He found that the bone bonded to the titanium so well it actually integrated as the tooth root bonds with the bone in the jaw.  This bond is so strong that if there is a fracture it is between bone and bone and never between the bone and the implant. With his implant came the concept of “osseointegration” and the confidence that dental implant education could be introduced into dental school curricula. This term was further refined and defined by Brånemark as “a direct structural and functional connection between ordered, living bone, and the surface of a load carrying implant.

The titanium implants became the standard and Nobel BioCare (founded by Dr. Brånemark) is the leader in the production and improvement of implants.  In 1997 the first tapered dental implant, mimicking the shape of a natural tooth root was created, becoming the world’s most frequently used implant system.  The following year 1998, in collaboration with Dr. Paulo Maló, Nobel BioCare created a concept with tilted and immediately loaded implants – the first of its kind. The legendary All-on-4® treatment concept.

In 2005 the FDA gave clearance for the Immediate Function Implants from Nobel BioCare.  That same year the NobelGuide digitized dental implantology, the first 3D treatment planning and guided surgery was released that allows for precision guidance of implant placement all initially planned outside your mouth for accurate placement of your implants into the bone to be most effective like your original tooth. Nobel BioCare implant system is often still copied, but never equaled.

Now that the type of metal was found best to be used for implants the next things to explore have been its shapes and its coatings.  One of the main reasons for the modification of dental implant surfaces is to decrease the healing time for osseointegration. The surface of a dental implant is the only part that is in contact with the bio-environment and the uniqueness of the surface directs the response and affects the mechanical strength of the implant/tissue interface.

After achievement of the implant integration with the bone (osseointegration), the next great achievement is the integration of the implant with the soft tissue (mucointegration) which supplies the greatest support for the implant and the prosthetic it connects with, thus behaving like the original tooth this system replaces.  This allows you to bite, chew, talk and provides facial structure as your original teeth.  For all the above reasons is why Columbia Dental partners with Nobel BioCare for all things implants.